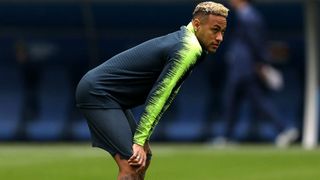 Brazil have been forced to accelerate Neymar's rehabilitation from his broken foot but head coach Tite insists he is not placing his star forward's fitness in jeopardy at the World Cup.

The Paris Saint-Germain superstar suffered a fractured metatarsal at the end of February but marked his return to action in style with sparkling goals in Brazil's pre-tournament wins over Croatia and Austria.

A 1-1 draw in the Group E opener against Switzerland was less satisfactory and, after drawing 10 fouls over the course of a sometimes-bruising encounter, Neymar limped out of training in Sochi earlier this week with a sore ankle.

He was back with his team-mates on the practice pitch on Wednesday and took part in training at Krestovsky Stadium on the eve of Brazil's match against Costa Rica.

Asked whether it would be a problem for the 26-year-old to perform in St Petersburg on Friday, Tite replied: "No, no. He had a blow [to the ankle] but we're still in the initial project. He was out for three-and-a-half months and has just played his first game of 90 minutes.

"There is a science and we have a lot of tranquillity with that. It takes about five matches for you to be full-on and he's already sped up the process.

"There is this evolution taking place. Don't worry."

Tite confirmed he would keep the same XI that started against Switzerland, with Gabriel Jesus leading the line, Willian on the right flank and Philippe Coutinho operating centrally as Neymar roves from his favoured left-sided position.

On whether the ex-Barcelona favourite was only being selected because this is a World Cup campaign, the former Corinthians coach insisted such a level of risk was not part of the equation.

"Yes, he would play [if this was not the World Cup]. It's not a sacrifice. It's an evolutionary process. You just speed up the steps," Tite added.

"We want to win. It's a World Cup but the coach is not going to pay with a player's health and be dishonest to win. That's a price that is too high to pay.

"You're going to pay the price if you're nervous and don't think about the game but there is no compromise on those values on health and honesty."