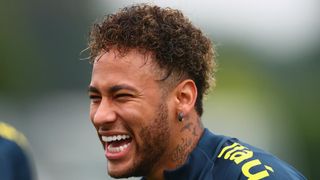 Neymar moving to Real Madrid would not come as a surprise to former Barcelona midfielder Gaizka Mendieta.

The Brazil star has been linked with a switch to the Champions League winners since becoming the world's most expensive player when he left Barca for Paris Saint-Germain in a €222million move last August.

Neymar has labelled the speculation "nonsense" although Zinedine Zidane described the forward as "compatible" with Cristiano Ronaldo prior to his shock departure from Madrid.

While players rarely move from Barca to Madrid or vice versa, a LaLiga return for Neymar would still be hugely controversial, Mendieta comparing the potential transfer with Luis Figo's decision to swap Camp Nou for the Santiago Bernabeu in 2000.

"I wouldn't be surprised if Neymar signed for Real Madrid," said Mendieta, who was speaking to Omnisport courtesy of Nissan, official UEFA Champions League sponsor.

"He is the player who can see his next challenge going to Real Madrid and if that happened he would do everything possible to be there. I insist that I wouldn't be surprised by that.

"I think Figo's signing for Real Madrid was harder for Barcelona supporters than Neymar could be. He was more important for Barcelona, he was the captain. Neymar went to PSG first.

"We will see if he goes to Madrid, let's see if Neymar arrived, let's see Ronaldo being there. I can admit Neymar is a great player but seeing Figo signing for Real Madrid was a lot. I don't know if we will see something like that in many many years."

"It's difficult to say something from outside. As you have said Barcelona seem to [want to] sign him but Atletico Madrid want him to stay," Mendieta added. "He seems to be in the middle and he doesn't know where to go.

"I think it's difficult to make those decisions when such a big team as Barcelona want you and Atletico Madrid too. It's something like to be there at the right time and go. He will fit Barcelona for sure because he will play as Neymar did and Barcelona could play with three up front.

"It will be a great team. Atletico Madrid could have a great loss with Griezmann leaving. Atletico Madrid are the team who most could lose with this transfer because at the end it's a personal decision. He has to value everything, either he wants to change life or stay at Atletico Madrid.

"We have already seen other players signing for Barcelona and reaching another results and figures than they were used to on other teams because there is a really top level player making the difference as Lionel Messi is, even he is not selfish but it's something you have to understand."