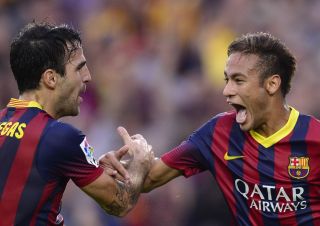 Cruyff was a key exponent of 'Total Football' as a coach and player with Barcelona, Ajax and the Netherlands among others throughout his career.

The three-time Ballon d'Or winner - who won La Liga once in his Camp Nou playing days - shares similarities with Neymar, according to Fabregas.

The 21-year-old has scored 11 goals in 26 appearances for the Catalan giants since arriving from Santos in the close-season and Fabregas paid him one of the highest compliments in football.

"I could never see him play live, but Cruyff had an incredible change of pace, like him.

"(He) starts fast, slows suddenly and restarts with a lot of speed."