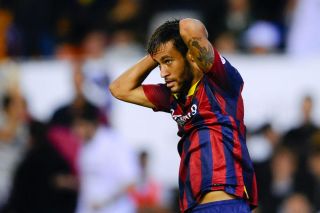 Barcelona trail leaders Atletico Madrid by four points going into their final three games, having been without Neymar for their last two matches.

The Brazil international picked up a foot injury in their Copa del Rey final defeat to Real Madrid after a difficult debut season that also saw Barca charged and later cleared for financial issues involving his transfer from Santos.

Neymar believes he can recover from his injury and play a role in the remainder of Barca's season and has urged his team-mates not to give up hope on the title.

"I hope to recover and play the last game. If I have a chance to help out, I will," Mundo Deportivo quotes him as saying.

"We must fight until the end. Hope is the last thing to lose. (Even) if we have only a one per cent chance of winning the title, we must be exhausted."

On the subject of his first season at Camp Nou, Neymar acknowledged it has been difficult.

"I had everything, good and bad, I've had a tough time, but I lift my head and look ahead," he added.

"I feel relaxed. Everything in life is not easy, sometimes there are good mornings and there are others that are less so.

"We recently lost the cup final and it is not a good feeling but you have to learn from everything. When you feel sad, you lift your head and keep smiling."