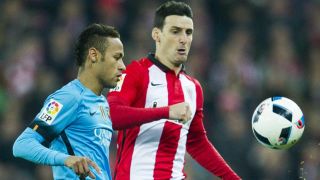 Athletic Bilbao striker Aritz Aduriz thinks Neymar needs to change his attitude, but apologised for dragging his foot across the fallen Barcelona forward's back during their Copa del Rey encounter.

Aduriz tripped Neymar up after having the ball dinked over his head and then appeared to catch the prone Brazilian on the back with his boot as he stepped across him.

The Brazilian drew a fiery response from Athletic players when he attempted a flamboyant skill in the late stages of their Copa del Rey final between the sides last season, garnering accusations of showboating and disrespect.

Aduriz, who went unpunished for Wednesday's incident and went on to score a late goal in the 2-1 quarter-final first-leg defeat,  said sorry to the Barca forward, but suggested he reconsider his approach to the game.

"Neymar is a global star but at times I wish he had a different attitude," the experienced forward said to Movistar +.

"I have apologised to Neymar because I have touched him a little.

"I did not go with intent to harm Neymar. These are things that remain on the pitch."