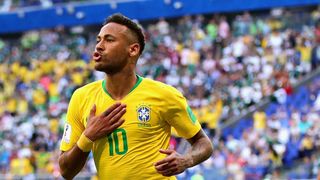 After Russia 2018 was shorn of two of its greatest stars on Saturday, Neymar ensured he would not be joining the exodus of headline talent by dragging Brazil through to the quarter-finals two days later.

Following a World Cup weekend which saw Lionel Messi and Cristiano Ronaldo bow out of the competition within a few hours of each other, the Selecao's talisman avoided befalling the same fate by scoring one and assisting the other in Monday's 2-0 win over Mexico in Samara.

The other two members of football's megastar fraternity had been confined to peripheral figures as Argentina and Portugal were undone by France and Uruguay respectively - Kylian Mbappe and Edinson Cavani stealing the limelight to perhaps signal the end of Messi and Ronaldo's duopoly.

In his pre-match media conference on Sunday, Thiago Silva referenced the stellar individual performances from his two Paris Saint-Germain team-mates and expressed his hope that a third would follow suit.

Ronaldo and Messi were packing their bags last night but in the early hours, Neymar and Brazil arrived in Samara v July 1, 2018

"They were both fundamental for the victories," he said. "PSG were well represented but we're talking about the national team...in the right moments the forwards have the freedom to do what they do best and we hope tomorrow is a great day and Neymar is inspired, like the other players."

This was by no means a virtuoso display from Neymar in the ilk of his PSG colleagues.

In the opening 20 minutes Brazil were under the cosh, their number 10 forced to chase back and help Filipe Luis deal with the significant threat of Hirving Lozano.

Tite had praised Neymar's defensive work in the win over Serbia last time out, but that area of the field is not where the head coach wants to see his most gifted player.

As the first half wore on, Neymar - and, subsequently, Brazil - grew into the contest, his shimmy beyond two players and a shot to test Guillermo Ochoa a sure sign that he was beginning to awaken.

The first of his key contributions arrived six minutes after the interval, as Willian got in down the left and sent across a low ball that evaded Gabriel Jesus but was perfect for Neymar to convert on the slide.

The goal was Neymar's sixth in World Cups, from his 38th shot. By comparison, Messi needed 67 efforts to reach that tally while Ronaldo required 74.

His performance was not without its histrionics - Miguel Layun standing on his ankle was a nasty moment, but did not warrant the dramatic, writhing reaction it received.

That side of his game is certainly not something that sits well with many, but after Mexico's Andres Guardado addressed the media in the build-up to the game and remarked on his tendency to "exaggerate" fouls, Neymar's team-mate Casemiro was quick to back up his colleague and insist he can handle any criticism that comes his way.

As the world's most expensive player and arguably the only man who has a realistic chance of challenging Messi and Ronaldo's Ballon d'Or dominance, Neymar must expect more than his fair share of examination and condemnation.

He was certainly put to the test by a lively Mexico outfit here, only securing the result two minutes from time by setting up Roberto Firmino for a simple tap-in.

Further challenges are to come, of course - Belgium or Japan await in the last eight - but, for now, Neymar can bask in the glory of inspiring his nation and getting one over on his two fellow luminaries, who were unable to force their will on proceedings in such a conclusive fashion.