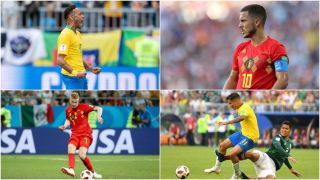 The World Cup quarter-final between Belgium and Brazil has the potential to be one of the matches of the tournament, with an incredible number of stars set to go head-to-head.

Belgium very nearly failed to get through to the last eight when they relied on a last-gasp Nacer Chadli goal to beat Japan 3-2 on Monday, completing a comeback from 2-0 down.

Brazil's passage was rather less dramatic, though their 2-0 defeat of a spirited Mexico side was by no means straightforward.

Few teams left at the World Cup can boast squads that are as starstudded as Brazil and Belgium, with renowned talents taking up almost every position on the pitch.

Therefore, we have highlighted some key areas and used Opta data to compare how players have fared in Russia so far...

Lukaku is coming out well on top in this Manchester-spanning duel. Although he missed a great chance against Japan, he still has four goals to his name from three outings and can be considered a contender for the Golden Boot.

Jesus, by contrast, is yet to score despite starting all four of Brazil's games. His single assist is more than Lukaku has, though the Belgian produced a very clever dummy for the winning goal against Japan which, although is not technically an assist, it certainly played a vital role in Chadli's clincher. Roberto Firmino might fancy his chances of stealing the Manchester City star's place.

In Brazil's 2-0 win over Mexico, it felt as though Neymar – after a slow start due to injury – got close to his best, scoring his second goal of the tournament and getting a first assist. He has been lively throughout the competition, creating an unmatched 16 chances, though it felt like something suddenly clicked.

Hazard will be arguably Belgium's vital creative cog and, while he perhaps has not been in the limelight as much as his rival at the World Cup so far, he is enjoying a steady campaign with two goals and two assists in just three games.

De Bruyne has not been the same force for Belgium that he was in Manchester City's Premier League title charge, a likely result of Roberto Martinez playing him so deep, but he has still managed to lay on 13 chances to team-mates from just three games, setting up one goal.

Coutinho has been one of the World Cup's standout players for many, scoring two and crafting one so far. On top of that, his passing accuracy of 90 per cent is greater than De Bruyne's (81.61 per cent), though the Belgian's creating of 13 chances in three games compared to the Barca star's 11 in four suggests his passing has been slightly more adventurous.

Defensive strength is not an aspect Brazil are often associated with, but they have been solid at the back in Russia so far. Silva – who has played every minute – has been a key part of that, keeping three clean sheets and generally providing a calming presence at the back, as evidenced by his 92.41 per cent pass accuracy.

In comparison, Alderweireld has only been involved in one shutout, while his record of three tackles is trumped by Silva's five. The Brazilian also comes out on top in interceptions (three to two) and blocks (four to two), though the Tottenham defender has played a game less.

This contest will see arguably the two best goalkeepers left in the competition at opposite ends of the same pitch – Alisson just about edging out Courtois three to two in terms of clean sheets.

Alisson has not had a huge amount to do so far behind his solid defence, making just three stops and enjoying a save percentage of 75, whereas Courtois has been called into action nine times, denying 66.67 per cent of shots sent his way.

Brazil's goalkeeper can expect to be a little busier against the likes of Lukaku and Hazard.