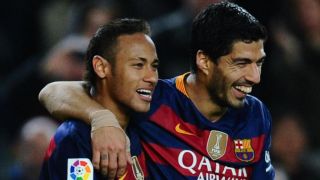 Luis Suarez believes Barcelona team-mate Neymar is the second best player in the world right now, but backed him to soon eclipse Lionel Messi as number one.

Messi, Neymar and Suarez have developed a partnership that has seen them become one of the deadliest trio's in world football history.

Messi claimed a record fifth Ballon d'Or last week and Suarez has reiterated his admiration for the Argentine.

"Leo is the best in the world," Suarez told Barca TV. "On the pitch, what he inspires is admiration, but off it, it's incredible how quiet and shy he is."

But Suarez has backed Brazil international Neymar to take the mantle of the best in the world in the near future.

"Today, Neymar is number two [in the world], he's behind Leo but he will keep learning from him, because he's a great reference," he said.

"But with every game, Neymar is doing different things, every time more difficult to pull off.

"Anytime soon he will be number one in the world.

"It is admirable the happiness he has, and his humility."