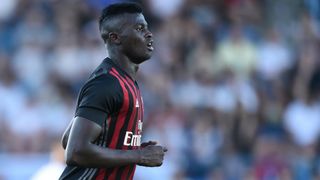 AC Milan forward M'Baye Niang says he will stay at San Siro for the 2016-17 season.

The 21-year-old, who was the subject of a reported £16million bid from Leicester City in January, has been heavily linked with a transfer to the Premier League in the past month.

Champions Leicester, Everton and West Ham have reportedly been monitoring the future of Niang, who was heavily criticised after uploading a video of himself jumping from the roof of his house into a swimming pool in June.

But Niang, who started the 2-1 friendly victory over Bordeaux on Saturday, says he is determined to work under new coach Vincenzo Montella in order to make the most of his significant potential.

"I have never talked about the transfer market and never thought about leaving," he said, as quoted by La Gazzetta dello Sport. "I'm a Milan player, I'm happy here and I will stay at Milan. I want to be an important part of this team.

"From the first day I got back, I have been speaking a lot with the coach. Now I know what I have to do if I am to become a champion.

"I am determined to listen to the coach. I must be good both on the field and off it. I realised the mistakes I've made and I must not repeat them."