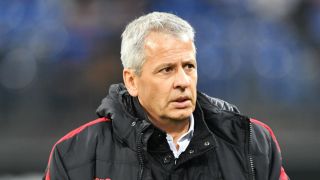 Lucien Favre will not leave Nice for Borussia Dortmund in the close-season the Ligue 1 club's general manager Julien Fournier insists.

In his first season at the helm at Allianz Riviera, Favre has secured Champions League football for next season after an early title challenge waned.

The Swiss has enhanced the reputation he built during his time in charge of Borussia Monchengladbach, who he twice guided to top-four finishes in the Bundesliga.

Favre has been tipped for a return to Germany with Thomas Tuchel admitting he is unsure if he will remain in charge at Dortmund in August following a public falling out with chief executive Hans-Joachim Watzke. The disagreement stems from the rescheduling of the Champions League quarter-final first leg against Monaco 24 hours after the German team's bus was involved in a bomb attack.

Following a report in Bild that Favre was seeking to leave Nice having agreed a short-term deal at Signal Iduna Park in principal, Fournier refuted such claims.

"Dortmund have had a very good idea, because Lucien is a top coach," he told Sport1.

"But they should have had this idea prior to the season when he was still on the market. He's at Nice now.

"Lucien will be our coach next season. He has never expressed the desire to leave us."