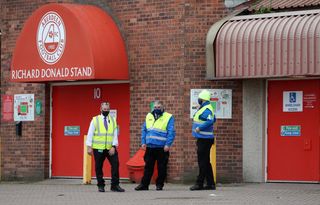 A “furious” Nicola Sturgeon has criticised the eight Aberdeen players whose trip to the pub sparked the postponement of their game against St Johnstone.

Saturday’s Scottish Premiership clash is off after two Aberdeen players tested positive for Covid-19 on Thursday and a further six were instructed to self-isolate for 14 days by health officials after coming into close contact.

The Scottish Government accused Aberdeen players of putting the return of football at risk following a “clear breach” of coronavirus protocols but the game initially survived on Thursday night following talks with the Scottish Football Association and Scottish Professional Football League.

However, with coronavirus cases in Aberdeen rising 22 to 101 amid an ongoing local lockdown, the football authorities agreed to a government request to call off the Perth encounter on Friday morning.

NS: "It is now clear that all eight of these players visited a bar in Aberdeen on Saturday night.— The SNP (@theSNP) August 7, 2020

The First Minister told a press conference said she was “pretty furious” about the behaviour of some Aberdeen players.

She said: “It is  now clear that all eight of these players visited a bar in Aberdeen on Saturday night. In doing so they blatantly broke the rules that had been agreed between the SFA, the SPFL, and the Scottish Government, which, to put it mildly, is completely unacceptable.

“We are asking members of the public to behave in a highly precautionary manner and when a football club ends up with players infected with Covid – and let’s remember this is not through bad luck but through clear breaches of the rules – we cannot take even a small risk that they then spread the infection to other parts of the country.”

The comments came hours after Aberdeen chairman Dave Cormack had appealed for fans to reserve judgement over the eight players.

Got the JRG decision on affected players 30 mins before it went public. Don’t have all the facts. Asking fans for their patience and trust. Please give the players the time they need to ensure they are healthy & to allow us time to review and reflect on what happened. Stand Free! pic.twitter.com/yNy2nqYjuY— Dave Cormack (@CormackDavie) August 7, 2020

Cormack said in a video message: “I don’t know about you but I’m far from perfect and prone to making errors of judgement. It’s all about how we respond to something we wish had not happened.

“We are therefore asking for your patience to give the affected players the time they need to make sure they are healthy and to provide the club with the opportunity to reflect on what we just went through.”

However, he later promised to deal with the situation seriously and apologised to the rest of the top flight.

In a statement on his club’s website, Cormack said: “With the pressure over this season’s fixtures, and the fact that we caused this problem, we were fully prepared to play the game. We are very grateful that the decision has been to postpone, rather than forfeit the game.

“I took the opportunity yesterday to apologise to both football and health authorities, and with our fellow Premiership clubs today.”

He added: “Regrettably, what has happened in the last few days has undermined all the hard work that has gone into keeping our players and staff safe. We are now dealing with this internally with the seriousness it deserves.

“In the meantime, I’d like to reassure the relevant bodies, our fans and everyone associated with the club that our already rigorous measures are being forensically scrutinised and that no stone will be left unturned in ensuring that no-one is under any doubt about what must be adhered to.”

The chief executives of Scottish football’s governing body and league were summoned to a meeting with sports minister Joe Fitzpatrick on Friday morning.

A statement from the two bodies’ Joint Response Group confirmed that a request had been received from the government to call off the game, which falls on the second weekend of the season.

“There is an evolving public health outbreak in Aberdeen and the minister conveyed the need for additional work to provide further assurance around Aberdeen FC’s adherence to the agreed protocols,” the statement added.

“Given the overriding responsibility to public health, the subsequent advice and discussion with the minister this morning means that the Joint Response Group must adhere to the request to postpone the match.”

St Johnstone added: “The club is disappointed at the news of this postponement but the health and wellbeing of everybody is of paramount importance in this situation.”