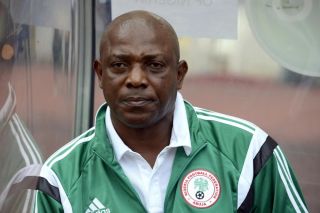 Keshi had been in charge of the African nation since 2011, but had been leading the team on a non-contract basis since the World Cup.

Nigeria took just one point from a possible nine early in qualifying for the Africa Cup of Nations in 2015, before Wednesday's 3-1 win over Sudan, which failed to convince Nigerian authorities of Keshi's capabilities to turn their form around.

As such, the Nigeria Football Federation have acted to replace their former captain with Amodu - who will serve in charge for the remainder of the year - following an NFF Executive Committee meeting on Wednesday.

"In the interest of Nigeria football and the desire to ensure qualification for the 2015 Africa Cup of Nations finals, the committee decided to relieve [Keshi and his coaching staff] of their duties with immediate effect," read an NFF statement.

This will be Amodu's fifth spell in charge of the national side, having last served between 2008 and 2010.

After Wednesday's 3-1 win over Sudan, Nigeria have two remaining qualifiers scheduled before the end of the year as they take on Congo and South Africa in November.

Nigeria sit third in Group A of qualifying for the Africa Cup of Nations next year, with a permanent foreign replacement expected by the start of 2015 as their hopes of a place at the competition in Morocco remain alive.