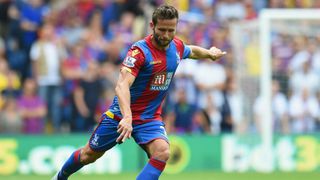 Yohan Cabaye has admitted that no "big" Premier League clubs were in the running for his signature when he opted to join Crystal Palace.

Palace completed one of the coups of the transfer window when they shelled out a club-record fee to bring France midfielder Cabaye back to England following his frustrating spell at Paris Saint-Germain.

The move to Selhurst Park reunited Cabaye with Alan Pardew, under whom he enjoyed two-and-a-half impressive years at Newcastle United before leaving for PSG in January 2014.

Speaking to French television programme Canal Football Club, midfielder Cabaye - who scored on his Premier League debut for Palace - said: "No one from the big clubs came forward, but it's not a default choice [signing for Palace] - far from it.

"I have been reunited with my former coach and I was not heading into the unknown. I feel really good."

On his time with PSG, the 29-year-old added: "It didn't go as I wanted in Paris, but I have no hard feelings towards anyone.

"It's hard when you know you're in a team where you're going to try things and, in the end, when you try them, sometimes you pull them off and sometimes not.

"I know that when I arrived, perhaps there were certain players that didn't want me to come. As soon as there was a ball lost, an interception missed or not the right pass, people would shout, would look at you strangely."