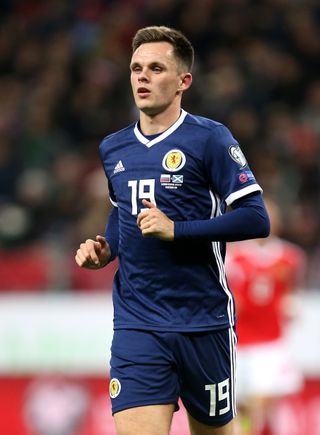 Reports on Thursday morning suggested the club had been tipped off about a potential £2.5million bid from French side Guingamp for the Scotland international.

The Ligue 2 outfit previously failed in an attempt to land Sam Cosgrove from Aberdeen and are now rumoured to be eyeing up a move for the Tangerines’ 25-year-old talisman.

But Mellon stressed there have been no expressions of interest in Shankland, who has yet to feature this season as he looks to overcome an ankle knock.

He said: “It’s not a distraction because I’ve had nothing to be distracted about.

“I’m not lying. We’ve had no contact. Nor has the sporting director Tony Asghar and nor have I.

“I am pleased that people are looking at Lawrence Shankland and saying he’s a good player as he deserves to be spoken like that.

“He’s got a wee niggly injury at the minute.

“But I’m going to be really sincere and say we’ve had no contact.

“I’d certainly be one of the first to know if that did happen so I can be really clear that I’ve spoken to Tony Asghar this morning and we’ve had no contact.”