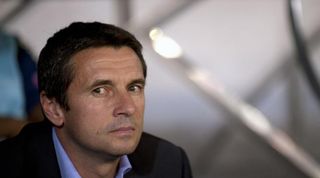 Garde's contract with the seven-time Ligue 1 champions expires at the end of the season and he has yet to put pen to paper on a new deal.

The 48-year-old has enjoyed an impressive spell since taking over at the Stade de Gerland in 2011.

But, while discussions on the matter are due to resume in the near future, Garde insists he is still undecided over where his future lies.

"We will soon discuss the following (his future) with the president," Garde said. "But there has been no decision made."

Lyon sit fifth in Ligue 1 ahead of Wednesday's clash with Toulouse, despite a season that has seen them beset by injuries, and Garde's immediate focus is on ensuring that they seal at least a UEFA Europa League berth.

He added: "We still have a goal to finish in the European places and as high as possible in the standings."