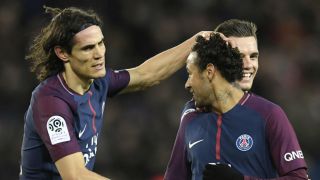 Uruguay striker Cavani moved level with Zlatan Ibrahimovic on 156 goals by nodding in PSG's third from Angel Di Maria's cross in an 8-0 demolition of Dijon at the Parc des Princes.

However, there was no room for sentiment from the former Barcelona star, who refused to let Cavani take a late penalty that would have seen him surpass Ibrahimovic's record.

Cavani, who has 20 league goals this term, was brought down by Cedric Yambere but Neymar ignored calls from the Parc des Princes crowd to allow his team-mate to step up, the Brazilian tucking away his fourth goal of the game.

Tensions appeared to flare between the two players in September when Neymar attempted to deprive Cavani of penalty duties in a Ligue 1 match against Lyon, the Uruguayan rejecting his team-mate's request only to then have his effort saved.

And Cavani, whose most prolific season came last term, when he hit an incredible 49 goals in 50 games, also missed a penalty against Troyes in November.