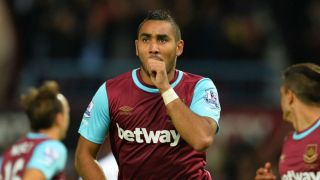 West Ham manager Slaven Bilic says "no money in the world" could persuade him to sell star attacker Dimitri Payet in the January transfer window.

Payet has been the leading man for West Ham since joining from Marseille in the close-season, contributing six goals in 16 Premier League appearances.

The France international is reportedly attracting several suitors, with Turkish Super Lig champions Galatasaray said to be among those interested in securing the 28-year-old's services.

"From my point of view there is no money in the world that we would let him go for," he said.

"He gives everyone a lift. The things he's doing on the pitch during games, he's doing the same stuff in training.

"It's great to have him in the squad and at the club. He's a really good professional, he does not skip training and he's motivated in training. It's what makes him a great player."

Bilic also stated that West Ham's move for Emmanuel Emenike is complicated by the fact they must negotiate with Al Ain, where he is on loan, and parent club Fenerbahce.

"We are waiting for that, because it is a complicated situation. He is a Fenerbahce player, but he is on loan to Al Ain," he added.

"We made contact, basically they called me from Al Ain and we thought we could do [the deal] with them, but Fenerbahce have to be involved and now we are talking to them."