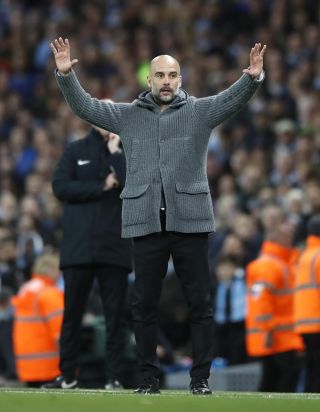 Pep Guardiola claims he is not nervous ahead of Manchester City’s final-game title decider at Brighton.

City will win the Premier League with victory at the Amex Stadium on Sunday – but any slip-up could allow Liverpool, who trail by just a point, to pip them at the post by beating Wolves.

It makes for a potential nerve-jangling end to the season but Guardiola claims he is relishing the situation and is not as apprehensive as he was before the champions’ crunch clash with Liverpool in January.

City prevailed on that occasion on what was a tense night at the Etihad Stadium, preventing the Merseysiders from opening up a 10-point lead at the summit.

Guardiola, the City manager, said: “I am so happy – no nerves at all. I was nervous before Liverpool, seven points behind, and we could have been 10 points behind.

One more game to go…#PLpic.twitter.com/lOtZaxF8eo— Premier League (@premierleague) May 6, 2019

City have won their last 13 games in what has been a remarkable title race in which they and Liverpool have matched each other almost blow for blow.

Guardiola’s men have needed to show all their champion qualities in their last four games – tight victories over Tottenham, Manchester United, Burnley and Leicester.

Dropping points in any of them would have seen the initiative switch to Liverpool, who have won eight in succession and are just a point behind heading into the final round of fixtures.

With such momentum behind them, Guardiola feels his team-talk should take care of itself.

He said: “I would say that I don’t have to say anything to motivate (the players). I think my speech will be zero.

“We have not spoken for two or three days about the Premier League (title) or back-to-back, or what happens if we lose, about celebrations if we win, zero.

“It is just about Brighton, how they defend, their strengths and weak points, what we have to do.