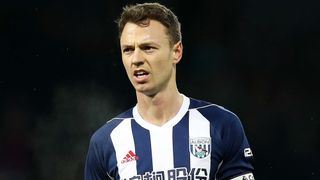 West Brom boss Alan Pardew says the club have not yet received an offer for centre-back Jonny Evans.

The Northern Ireland international is reportedly a target for Manchester City and Arsenal for this transfer window, with rumours placing his value at around £23million.

Pardew, however, says they are still waiting for an official approach and has warned that he would like any prospective deal to go through sooner rather than later so a replacement can be brought in.

"From my point of view there is no bid, so there's nothing to discuss," Pardew told a news conference ahead of his side's Premier League clash with Everton on Saturday.

"On the other hand, we have scenarios that are going to time out if we don't get a bid for Jonny that's acceptable for him and us.

"Jonny hasn't come and seen me this week, so I'm in the dark a little bit. We haven't had a phone call from another football club and that's where it stands.

"In terms of our plans to use that money if it was to come in the door, that time is ticking away and that concerns me a little bit more."

Pardew praised Evans' focus amid the speculation over his future, saying the former Manchester United man has behaved impeccably.

"He's been terrific, in and around the training ground, everything. He has a core mentality about this sort of thing," he said.

"Other players that I've experienced in the past, their emotions can get the better of them and they do things that let themselves down. You have to remind them that they're letting their team-mates down.

"I've never had anything like that with Jonny. It's a pat on the back really for him and the character that he is."

The skipper's bullet back-post header Join , & every matchday for free Baggies-biased live commentary from The Hawthorns and on the road.Details  January 16, 2018