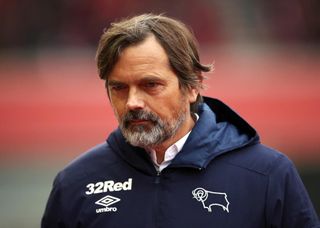 Philip Cocu was bitterly disappointed as Derby lost 3-2 to struggling Luton and wasted the opportunity for a first away league win since the opening day of the season.

Wayne Rooney’s first goal for the club saw the Rams ahead just after the hour mark before the hosts hit back, Jayden Bogle’s late own goal settling a pulsating match in Town’s favour.

Cocu said: “It’s very disappointing, we created chances, we didn’t score over a long period, then the first goal came.

“We should have more goals, then after the first goal we totally lost initiative, lost our organisation, didn’t defend set-pieces and in seven minutes they take hold of the game.

“It’s something that cannot happen to us, especially at this stage of the competition.

“We got back again, scored a great goal and we know the rules of football, late equaliser, you can score another one, it’s great, we have the win, but we’re not going to lose the game.

“Then it’s poor defending for the last goal so it’s ourselves to blame in this defeat, as it’s unnecessary.”

Rooney’s first goal was warmly celebrated by his team-mates but Cocu said: “I cannot focus on any positives, 3-2 in the last minute is a big setback.

“It’s good for him to score, and he had a good game, but it’s about winning. Today we have had an excellent opportunity to win an away game and we didn’t do it.”

After a first half in which Harry Cornick went closest for the hosts, the second period burst into life once Rooney’s deflected effort beat Simon Sluga.

The hosts levelled on 67 minutes after Pelly Ruddock fired home from the edge of the box and then led six minutes later, Donervon Daniels heading in a first goal for the club from James Bree’s corner.

Chris Martin came off the Derby bench to power home a header with five minutes to go, only for Bogle to get the final touch on Cornick’s cross as Luton won it. The Rams finished with 10 men when Max Lowe saw red for pushing referee Andy Davies late on.

Hatters boss Graeme Jones said: “It’s our first win in nine (league games) and it was incredibly satisfying, because we managed to stay together when everybody’s tried to divide us and they haven’t.

“We’re against all the odds and to dig out a win after responding to going a goal down is really satisfying.

“The desire, the need, the character of the group, I think we had more efforts on target than them. They had more possession, obviously they’ve got some really, really good players but our lads didn’t listen to any of that.

“I thought we were exceptional as we still managed to have composure, confidence and belief to play.”