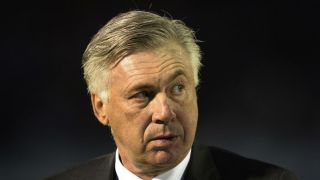 Ancelotti has signed a three-year contract with Bayern to replace Pep Guardiola, beginning next season.

Rummenigge said the Bundesliga giants already had a strong squad for Ancelotti to take charge of, rubbishing suggestions they were set for multiple signings at campaign's end.

"I haven't met him yet since he is still out there in Canada or the US," he said.

"I heard him though and it is not true that he sent me the shopping list for next summer. We have a good squad and he knows that.

"He is not a complicated man form this point of view."

While Bayern are cruising atop the Bundesliga, they are set to face a tougher challenge in the Champions League.

After being drawn to face in-form Serie A giants Juventus in the round of 16, Rummenigge said the timing of the tie had worked against his team.

Juve have won nine consecutive league games to move up to second in the table, having made a slow start to the season.

"If you compare today's table and the one of a few weeks back, Juventus came back very well. It would have been easier to play them a few months ago."