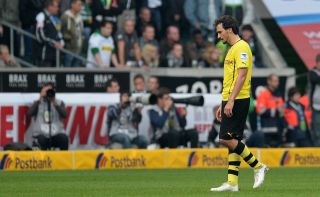 There had been speculation that the Germany international was the subject of interest from the Spanish giants, having become a regular starter under Jurgen Klopp at Signal Iduna Park.

However, the 24-year-old, who featured in Dortmund's UEFA Champions League victory over Arsenal on Tuesday, insists the rumours are not true.

"There is no truth in these stories," he told Sky Deutschland. "Of course, every now and then there are bits of reports. That's the same about other players, too.

"I read about (Ilkay) Gundogan and Thomas Muller going to Barcelona. He went to the city of Barcelona to have dinner. This just happens, and then you are getting linked to a move.

"Then, there are some people claiming they are in touch with Barcelona. And they tell the media about it.

"We did experience that back in April. Three days later, this was written in a newspaper.

Hummels has played in seven of Dortmund's nine Bundesliga matches this season and is likely to return to action following suspension for the Ruhr derby against Schalke on Saturday.