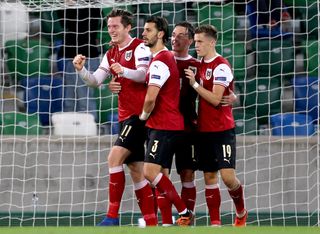 After the party came the hangover as Northern Ireland were brought back down to Earth in a 1-0 home defeat to Austria.

Three days after the highs of Thursday’s dramatic penalty shoot-out win over Bosnia and Herzegovina to keep alive hopes of reaching Euro 2020 next summer, Northern Ireland’s Nations League woes continued as they lost for the sixth time in seven matches in this competition.

The presence of 600 members of the Green and White Army inside Windsor Park could not rouse Northern Ireland as they were comfortably outplayed by the hosts, who won through Michael Gregoritsch’s header and might have scored many more on the night.

⚽️ FT: Not the result we wanted as we’re edged out 1-0 by Austria #OneDreamOneGAWApic.twitter.com/X6Ar1gpiJZ— Northern Ireland (@NorthernIreland) October 11, 2020

With 120 minutes of tense, nervous football in the legs from Thursday, Baraclough looked to freshen up his side with five changes, including Kyle Lafferty, Jordan Jones and Gavin Whyte in attack and a rare start for Michael McGovern in goal.

But they were second best to Austria almost throughout, and were ultimately grateful that Marko Arnautovic had not been able to travel from Shanghai to play in this international window as Franco Foda’s side passed up several chances to inflict a more convincing defeat.

Austria were on top almost immediately as they bossed midfield and created chances throughout the first half.

Gregoritsch just missed a through ball from David Alaba before Stefan Ilsanker then headed straight at Michael McGovern, playing only his second game for club or country in 12 months.

When Jamal Lewis failed to cut out a deep Alaba cross, Reinhold Ranftl could not adjust his feet in time.

The let-offs kept coming for the hosts as Christoph Baumgartner poked a tame shot at McGovern from close range before Martin Hinteregger failed to get any power on his header from a corner.

The best chance of all came just before the half hour when Craig Cathcart’s tame back pass was snapped up by Baumgartner but, once through on goal, he bent his shot beyond the far post.

But the almost relentless pressure told just before the break when Hinteregger’s sweeping cross from the left found Gregoritsch who headed past McGovern with ease.

Northern Ireland responded after the break, playing their brightest football in the opening 20 minutes of the second half, but they could not convert it into chances.

The first real sight of goal did not come until the 68th minute when Jonny Evans got a glancing header on to Paddy McNair’s cross, but directed it straight at Pavao Pervan.

Baraclough sent on Conor Washington, Liam Boyce and Josh Magennis in the latter stages but service to the front men did not improve.

The only opening came in stoppage time when a quick free-kick freed Boyce, but the hero of Thursday’s shoot-out fired narrowly wide.

Defeat means Northern Ireland remain without a win in the short history of this competition, with Austria and Bosnia the teams that beat them home and away two years ago before last month’s 1-1 draw in Romania earned them their only point to date.

The odds on their fortunes changing in Wednesday’s trip to Oslo to face Norway, 5-1 winners in Belfast last month, do not look favourable.

The focus for this window was always on the Bosnia match but this was still a disappointing night after the highs of Thursday.