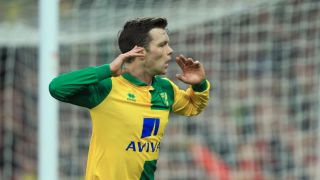 Manager Alex Neil underlined the importance of Monday's fixture at Carrow Road with Norwich languishing just above the Premier League relegation zone having won just once in their previous six outings.

And the message was heeded as Howson showed brilliant technique to fire past Brad Guzan in the first half much to the delight of the home supporters.

The goal was a sucker punch for Villa, who remain winless under boss Remi Garde, with the visitors having started brightly and seen good chances through Micah Richards and Jordan Ayew go begging.

But Norwich ensured they signed off 2015 on a winning note when Mbokani headed in his third Premier League goal in the closing stages to leave Neil's side three points clear of the relegation zone.

Villa, though, have not won in the league since the opening day of the season and, with just eight points taken at the halfway stage, staving off relegation is becoming an increasingly daunting task.

There was plenty of early encouragement for Villa as Jordan Veretout's stinging 20-yard drive drew a smart stop from Declan Rudd before Richards failed to make clean contact with the midfielder's corner.

Kieran Richardson then saw a long-range dipping half-volley clear the crossbar and Ayew had a great chance to open the scoring with a free header from Veretout's excellent free-kick that Rudd parried to safety.

But it was Norwich who stole ahead against the run of play in the 24th minute.

Leandro Bacuna's weak defensive header from Nathan Redmond's dinked cross looped towards Howson on the right-hand side of the area and he volleyed home emphatically.

Ayew saw tentative penalty claims waved away in the second half after going to ground when tussling with Sebastien Bassong.

At the other end Guzan was let off the hook when he failed to deal with Redmond's harmless looking strike, but Howson side-footed the rebound just wide of the right-hand post from the edge of the area.

Norwich had another chance to see off the game when Mbokani stole possession deep in Villa's half and broke two on one with Wes Hoolahan, only for Ciaran Clark to make an excellent recovering tackle.

The second did arrive in the 87th minute, though, as Hoolahan hung up a cross from the left that Mbokani powered past a helpless Guzan.

Ashley Westwood, Richards and Russell Martin were all booked in additional time as tempers flared and Villa's frustration threatened to boil over, but it failed to sour Norwich's win.