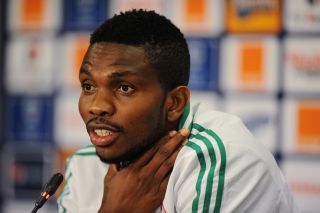 The 33-year-old Nigeria international played for Premier League side Everton between 2003 and 2010 before moving to the Super Lig, initially on loan prior to a permanent switch.

Chris Hughton is looking to bring the defender in on a temporary basis ahead of the transfer window closing on Friday.

"City can confirm we are in talks with Turkish club Fenerbahce regarding a deal to bring experienced Nigerian international central defender Joseph Yobo to Carrow Road on loan until the end of the season," Norwich stated via their official website.

"Initially joining Everton on loan from Marseille, he made a total of 258 appearances in all competitions for the Toffees and scored 10 goals."

Norwich have suffered a mixed season so far and, despite sitting 12th in the Premier League, have won only two of their last 10 top-flight matches.