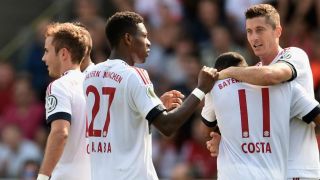 Arturo Vidal showed glimpses of his all-action best as Bayern Munich met expectations with a 3-1 win over fifth-tier side Nottingen to get their DFB-Pokal campaign off to a comfortable start on Sunday.

Pep Guardiola's men reached the semi-finals of last season's Pokal, and they will hope to go deep in the competition again after avoiding a shock at the Wildparkstadion thanks to goals from Vidal, Mario Gotze and Robert Lewandowski before the break.

Vidal scored his first competitive goal for the club with a fifth-minute penalty and, although Nottingen threatened to spring a surprise with Niklas Hecht-Zirpel's strike, they stayed level for less than a minute.

Gotze, a subject of regular transfer speculation during the close-season, put Bayern back in the lead with a good finish from the edge of the box – Vidal claiming the assist in an impressive 45-minute cameo.

Lewandowski added his name to the scoresheet in the 26th minute, putting daylight between the two sides after a succession of kind ricochets.

Bayern should have scored a fourth 14 minutes from the end as Douglas Costa missed the target, but it mattered little as the Bavarian giants strolled into the second round.

Nottingen goalkeeper Robin Kraski acknowledged in the build-up that that Oberliga outfit's primary objective was to remain on level terms for as long as possible, but they shot themselves in the foot with just five minutes on the clock.

Felix Zachmann was penalised for handling the ball inside the area and Vidal confidently stroked past Kraski with the resulting spot-kick.

But the home side stunned their illustrious visitors 11 minutes later, as Hercht-Zirpel slammed in the rebound after his initial effort was saved by Sven Ulreich.

Their joy was short-lived, though, as Bayern retook the lead within a minute, Gotze producing a tidy finish from the edge of the area after a pinpoint pass from Vidal on the right flank.

And Bayern had their third nine minutes later, as Lewandowski stabbed in from close range after Jerome Boateng's powerful drive struck both Sascha Walter and Timo Brenner on its way to the Pole's feet.

Vidal was withdrawn at the break and Nottingen began the second period well, giving the Bayern defence plenty to think about and going close in the 52nd minute as Mario Bilger forced Ulreich into an unconvincing save.

The home side passed the ball around well and did catch the eye at times in the second half, but Bayern rarely looked in any real danger.

Bayern should have added a fourth for good measure in the 76th minute as Costa broke free and missed the target with Lewandowski well-placed, but it mattered little as the visitors sailed through.