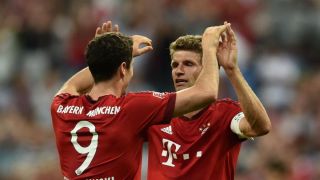 If Bundesliga champions Bayern were to lose to the minnows, who play in the fifth tier of German football, it would represent one of the greatest shocks in the competition's history.

No team has been more successful in the Pokal than Bayern, who have lifted the trophy on 17 occasions and appeared in the final 20 times.

And Muller says his team will give their opponents the respect they deserve in Sunday's contest at the Wildparkstadion.

"Everyone thinks that victory is a foregone conclusion, but we're very serious about it."

Bayern, who were knocked out in the semi-finals on penalties by Borussia Dortmund last season, started their domestic campaign with a shootout defeat to last year's Pokal winners Wolfsburg in the DFL-Supercup.

Pep Guardiola's men had no time to dwell on the defeat, though, and bounced back with victories over Milan and Real Madrid in the Audi Cup, which Bayern hosted at the Allianz Arena.

"We've done it well and won against two big teams," he said. "We start the season with confidence."

Nottingen's primary aim is likely to be achieving a respectable score, and the club's goalkeeper Robin Kraski just wants the team to give a good account of themselves against one of the world's best sides.

"We want to show how much we look forward to the game and that we are not afraid," he told Bayern's website. "We want to enjoy this game because it will be one of the biggest games in our careers.

"Our aim must be to keep the score level for as long as possible then see what happens."