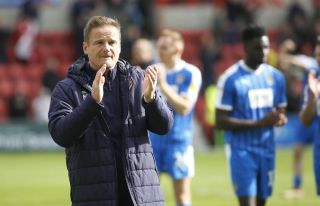 Notts County have been relegated from the Football League for the first time in the club’s history.

The Magpies’ relegation was confirmed with a 3-1 loss to Swindon on the final day of the season, Macclesfield and Sol Campbell surviving in their place.

Neal Ardley’s team had to win at the County Ground to stand any chance of avoiding the drop as they went into the final day of the season in 23rd place in League Two, two points behind the Silkmen with an inferior goal difference of eight.

Relegation means Notts County, who have won only nine league matches all season, lose their proud status as the oldest Football League club, having been formed in 1862.

That mantle now passes across the River Trent to Nottingham Forest, who were founded in 1865. Some claim it is Stoke but even the club’s own website admits “many details remain sketchy” about their formation, purported to be in 1863.

Ardley has already gone on record as saying he would like to remain in charge. He became the club’s third manager of the season when he replaced Harry Kewell in November.

His future is likely to be subject to the club’s potential new owners, with takeover talks ongoing at Meadow Lane. A consortium from South Africa is reported to be close to finalising a deal with current owner Alan Hardy.