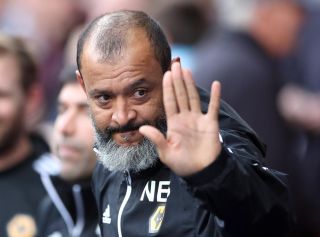 The Molineux side have had the least amount of shots in the Premier League – 80 – just one behind Sunday’s hosts Newcastle.

They have scored 12 in their opening nine top-flight games, to sit in mid-table, and are unbeaten in their last seven games in all competitions.

Raul Jimenez is their three-goal top-scorer in the Premier League – two coming from the spot – but boss Nuno does not doubt Wolves’ creativity.

“If you have a lot of shots and you don’t score, you have a problem. It depends but it is one of the aspects that we have to improve, of course.

“To be able to score you have to shoot but shoot in the right moment, don’t shoot because of the stats. Shoot because it’s a good option.

Nuno also defended £16million striker Patrick Cutrone, who has struggled to adapt since his summer move from AC Milan.

He was hauled off at half-time of Thursday’s 2-1 Europa League win at Slovan Bratislava and has scored just once in 16 appearances.

“He’s integrating into the team, it’s not easy to come and be already where they expect them to be but it takes time,” added Nuno.

“He works hard so it’s up to us to decide but of course all of the players that came are integrating in the spirit of the club and the squad so we’re expecting good things from him.

“It’s not easy but it’s a challenge for him. This is what we want from players, to take him out of his comfort zone and always be able to upgrade your performance.

“Be versatile enough to play in different positions and different shapes and systems is one of the things that the players must be ready because nothing is internal.”