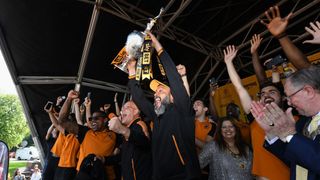 Nuno Espirito Santo has committed his future to Premier League new boys Wolves by signing a one-year contract extension until 2021.

Head coach Nuno arrived at Molineux ahead of the 2017-18 Championship campaign and led Wolves to the Championship title in his maiden campaign, racking up 99 points in the process – nine clear of Cardiff City.

The Portuguese's reward for sealing Wolves top-flight return after a six-year gap is a fresh contract, with his backroom staff also penning new terms.

"I am very thankful because of the trust and the confidence that the club puts in us as a technical team," Nuno told the club's official website.

"My team really work as a team. First of all we are friends, we respect each other, we admire each other and we work for the same goal.

"That goal is to find every detail we can to help the team to perform well, compete well, and fortunately win.

"We knew that the project required time and now we have three years ahead of us and we are very, very thankful and delighted to be here."

The 44-year-old will now turn his attention to keeping Wolves in the Premier League, a challenge he knows will be a tough one to achieve.

"In year two we know the challenge is even more difficult," he added. "But we have something that we hold onto - we have our own identity.

"We have to hold onto it, further develop the performance of some players, getting them to a higher level, and at the same time we will increase the quality.

"We need to bring in players and we will do so, but it is very difficult to find the right ones, because the quality that we have already is high."