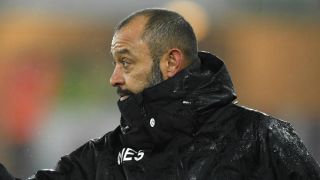 Nuno Espirito Santo played down fears Wolves striker Diogo Jota may have been badly hurt during a Championship defeat of Sheffield United.

Jota was among the scorers as Wolves restored their 11-point lead at the top of the table, Ruben Neves and Ivan Cavaleiro also on target in a fine team performance.

But the striker, who will complete a permanent move to Wolves at the end of the season, was injured in a challenge from Simon Moore, which earned the goalkeeper a red card.

Nuno confirmed, however, Jota's injury is not thought to be serious as his side's march towards promotion to the Premier League continued, saying the forward was "a little bit dizzy but OK".

The Wolves boss added: "The goalkeeper goes out - and remember, I was a goalkeeper - and sometimes you run out of time and you can't stop.

"He's a big guy and he's jumping in the air and he can't stop. There's no intention to harm Diogo at all.

"It was a very good performance from the boys, in all aspects of the game - defensively, offensively, with and without the ball. We knew it would be a tough challenge against a team that beat us in the reverse fixture, but we prepared well and were well organised and played some good football.

"The early goal changes everything. It was a fantastic goal, and the second one was really good as well. Our fans are happy today because they've seen really good football and really good goals from a team that fights and works hard. We always try to improve and I'm really happy with that."

The fan cam from Wolves' second goal of the evening, Which came courtesy of . February 3, 2018

Earlier in the day, Derby County beat Brentford 3-0 while Aston Villa were 3-2 victors at home to Burton Albion as the chasing pack tried to narrow the gap to Wolves.

Cardiff City won 4-1 at 10-man Leeds United to maintain their own promotion challenge, with Fulham 2-0 winners at home to Nottingham Forest, while at the bottom Sunderland's woes continued with a 2-0 home defeat to Ipswich Town.