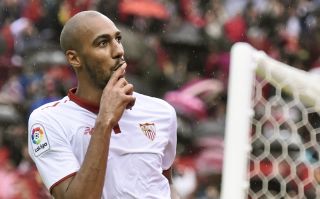 The 28-year-old former Blackburn Rovers and Stoke City ball-winner helped the Andalusian side sit third in the La Liga table before the winter break, having featured in their Europa League triumph last term, defeating Liverpool in the final.

N’Zonzi’s form has led to suggestions that the Frenchman could be on the move in January, with Barcelona, Arsenal and Manchester City among the clubs said to be lining up bids.

But N’Zonzi says in the February 2017 issue of FourFourTwo magazine that, until an offer has been accepted, he will be carrying on as normal.

“The Barcelona interest is flattering, but it’s only in the papers. I don’t even think about it as I’m happy at Sevilla. It’s something you get used to – until something actually happens, then it isn’t really worth thinking about. But to be linked with clubs is a sign that I’m playing pretty well, so that’s nice.

“I don’t miss the Premier League. I love it here. It feels like the whole city is behind the team. We feel so tough to beat at home because the fans are incredible. The players can feel it. They are extremely passionate.”

Read the full interview with Steven N’Zonzi in the February 2017 issue of FourFourTwo magazine, which focuses on Arsenal’s dynamic duo, Mesut Ozil and Alexis Sanchez, and remembers 31 other potent partnerships from years gone by. Also this month: 26 mental moments from Africa Cup of Nations history, the unbelievable true story of East German football, a visit to Canada for the MLS Cup final, and exclusive chats with Gunners midfielder Granit Xhana, former Liverpool attacker Dirk Kuyt and Leatherhead boss Jimmy Bullard. Go get it, then subscribe!