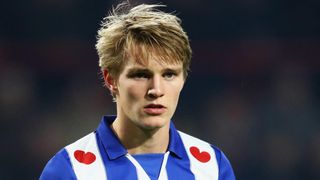 Odegaard was thrust into the spotlight when he moved to Madrid as a 16-year-old in January 2015, but he has since made just one league appearance for Zinedine Zidane's side.

However, the Champions League winners appear to have kept faith in the Norwegian's talent by handing him an extension beyond the end of the season.

The new deal reportedly ties Odegaard to Madrid until the end of the 2020-21 campaign, although the nine-time international was hesitant to reveal the length of the contract.

"A little more than 2018 at least," he told Norwegian publication VG Sporten of the extension.

"I do not want to say much more at the moment."

Odegaard is currently into the second season of an 18-month loan stint at Eredivisie side Heerenveen, where he has started all three matches this term.

Speaking in June, the 18-year-old reiterated his belief in breaking through at Madrid.

"They come to watch my games and follow me closely," he told Norwegian television channel TV 2.

"They said that they would be monitoring how I am getting along and say that they still want to invest in me."