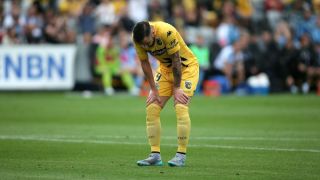 The Irishman received only a yellow card after he headbutted Muscat in the 59th minute of the Mariners' 3-1 win over the Phoenix in the A-League.

The two clashed just moments earlier, with Muscat sending an elbow in the striker's direction, before O'Donovan retaliated.

O'Donovan subsequently accused Muscat of going "down like a movie star" but has since pleaded guilty to charges of 'assault on a player'.

"The Disciplinary Committee determined that the Player must serve a suspension of eight (8) matches," read a Football Federation Australia (FFA) statement.

"The Player has the right to appeal the determination of the Disciplinary Committee. If the Player intends to do so, he must advise FFA within 7 days of receiving the written determination."

Muscat was banned for two matches on Tuesday for his apparent elbow on O'Donovan.