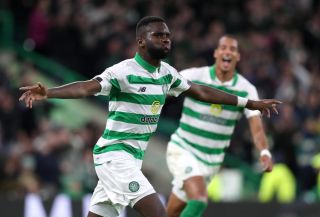 Odsonne Edouard continued his impressive goalscoring record against Rangers as Celtic won 2-0 in the Old Firm derby at Ibrox.

The Frenchman capitalised on a loose pass to net his fifth goal in seven derbies in the 32nd minute following a tight opening to the game.

Substitute Jonny Hayes rounded off the victory in stoppage time after netting at the second attempt on the counter-attack.

The hosts started without any natural width or top goalscorer Alfredo Morelos and they took almost an hour to manage a shot on target.

Rangers suffered further insult in the final seconds as substitute Jordan Jones was sent off for a foul on Moritz Bauer.

All four fixtures had been won by the home team last season after the visiting ticket allocations had been slashed to less than a thousand.

And Celtic’s victory saw them extend their 100 per cent record in the Ladbrokes Premiership to four wins.