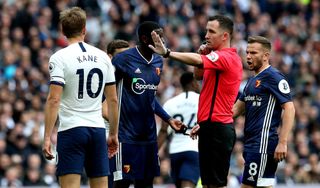 Officials are happy to trust in the advice of a video assistant rather than make use of a pitchside monitor, the chairman of the Referees’ Association believes.

Premier League clubs could push for on-field referees to make greater use of the monitors when they gather for their next shareholders’ meeting on November 14.

They have not been utilised once in the 100 top-flight matches to date this season, with the 26 overturned decisions so far being reversed on the advice of the video assistant referee (VAR).

The PA news agency understands that the policy to use the monitors sparingly was endorsed by top-flight clubs, managers and captains to keep the game flowing when they were consulted over the issue before the season, and again at their last meeting in September.

And Paul Field, whose organisation looks after the welfare of referees and contains officials of all ages and at all levels within its membership, says in his view “team loyalty” is just as prevalent among officials as it is within football clubs themselves.

“You hear (Pep) Guardiola and Jurgen Klopp talk about team loyalty – that’s what we have in refereeing,” he told the PA news agency.

“(They are) a very tight-knit family, a team of people who are not going to go and cause their team-mate any untoward hassle through one upmanship.

“They would soon be out of the family and put to one side (if they did) because that’s just human nature. The power of the team is a lot greater than people realise. If I was in the middle and someone was telling me ‘that is 100 per cent a red card’ I’d willingly accept that because I would trust my colleague implicitly.

“There is no difference between (referees) and (Sadio) Mane, (Roberto) Firmino and (Mohamed) Salah. They trust each other – what’s the difference?”

He recalled the “outcry” that had accompanied some of the long delays that had been caused by referees using the monitors, such as in the Liverpool v West Brom FA Cup match in January 2018 when Craig Pawson consulted a monitor before awarding the home side a penalty.

Field said the feedback he had received from officials regarding VAR at the top level was positive, and said there was “nothing sinister” in tweaking the protocols during a season, as long as it was being done collectively rather than selectively.

“It will be an ongoing evolution. In 10 years’ time we might be having a conversation because we are tweaking something else,” he added.

“It’s a never-ending circle isn’t it? As the laws change it will always evolve, and there will be technological advances I guess.”