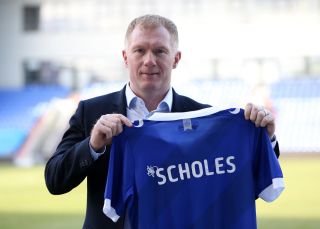 Oldham owner Abdallah Lemsagam has denied interfering in team affairs after Paul Scholes walked out just 31 days into an 18-month contract as manager.

Scholes quit the club last week stating it “became clear that I would not be able to operate as I intended and was led to believe prior to taking on the role”.

Rumours of interference from board level have dogged the League Two club during Lemsagam’s tenure but he rejected claims that was what forced Scholes to leave.

“I was away for 21 days, how could I interfere with his job?” he told Sky Sports News.

“As a chairman or owner I ask who is going to play, which is normal in football.

“The only time I talked with him was about one player when I asked him if he wanted to keep a player and he said he was happy for me to let him go.

Scholes reportedly quit via a WhatsApp message but Lemsagam claims he tried unsuccessfully to get the former Manchester United midfielder to return.

“How he left is not an easy question. It is a pity because he left in a difficult situation,” he added.

“I gave him a contract for 18 months and the first thing I told him was ‘You’re not under pressure’. It’s a pity he just left.

“To send it just a WhatsApp message was a little bit hard. It hurt but it is part of life.

“We tried to convince him to come back. I tried to call him many times but he didn’t answer.”

Oldham have brought back former caretaker manager Pete Wild as head coach for the remainder of the season.