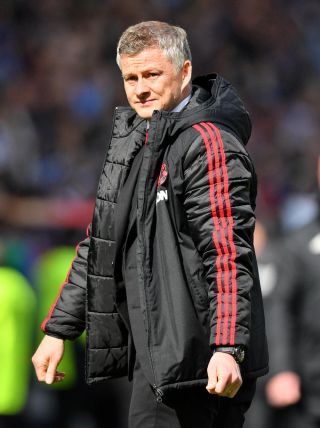 Ole Gunnar Solskjaer admitted Manchester United were just not good enough after Sunday’s draw at Huddersfield ended their hopes of a top-four finish.

The point left Solskjaer’s side four points behind fourth-placed Tottenham with one game left, with a sixth-place finish behind Arsenal appearing likely.

“Effort and attitude was not the problem,” Solskjaer said. “The players were running and trying. We just weren’t good enough. That is the problem.

“We could have, should have, played better. In the first half an hour they weren’t close to our box once. Today we had good periods, very bad periods. It has just caught up with us. It is a fair reflection, being sixth.”

United’s winless run was extended to five matches in all competitions and Solskjaer was left to rue several missed opportunities for them to rescue their season.

“We gave ourselves a chance to be in the Champions League, something we didn’t think was possible,” he said.

"You could say we lost the opportunity today, but that’s not the case — it’s been all through the season. It’s not been good enough." #MUFC— Manchester United (@ManUtd) May 5, 2019

“We had so many opportunities to grab third or fourth. We weren’t able to. So it’s probably the right place for us, the Europa League, next year.

“And if (Manchester) City don’t win the FA Cup we’ll have a very early and bright start (in the) qualifiers for the Europa League and that just might make it even more difficult.”

Solskjaer was referring to the possibility of his side having to play in a Europa League qualifier should Watford beat City in the FA Cup final.

A Watford win at Wembley would send them straight into the Europa League group stage and leave United facing a qualifying match on July 25, the same day they are scheduled to play Tottenham in a pre-season friendly in Shanghai.

United started well, with McTominay giving them an eighth-minute lead with a low shot from the edge of the box that Huddersfield goalkeeper Jonas Lossl misjudged.

Lossl made amends by pushing Pogba’s header on to the crossbar shortly before half-time, but Huddersfield were allowed to force their way into the game in the second period.

Pogba hit the crossbar again in the closing stages with a shot from outside the area, but Huddersfield held on.

Two great chances for #MUFC, but Chong and Pogba are denied by Lossl and the crossbar respectively. #HUDMUNpic.twitter.com/3L1efXOZLu— Manchester United (@ManUtd) May 5, 2019

Solskjaer said his players were not letting him down, but were “a tired team”, while he refused to be despondent.

“You can use the Europa League as something positive as Chelsea and Arsenal have done this year and we did a couple of years ago when we won it.

“I’m an optimist by nature and you make the most of it. We have to make something positive out of it.”

Huddersfield halted a run of eight straight defeats under boss Jan Siewert, who felt vindicated for sticking to his philosophy.

“I always say I believe what I am doing,” the German said. “It is tough to change a playing idea during such a season.

“It is important we stuck to it and showed it is possible against such a tough opponent. We wanted to give something back to the chairman and the fans.”

Town chairman Dean Hoyle is in the process of selling the club to lifelong Terriers fan Phil Hodgkinson, and Siewert paid tribute to the club’s popular out-going owner.

“He is an incredible person,” Siewert added. “He was one of the reasons I signed for this club and the legacy he leaves here will be carried on. I am really sure it will go on.”