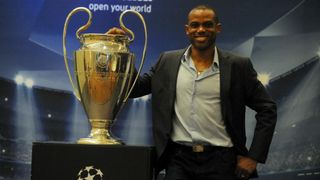 Sunday Oliseh has announced via social media that he is resigning as head coach of Nigeria.

The former midfielder was appointed in July last year, but has accused the Nigerian Football Federation (NFF) of a breach of contract after stating he will step down.

"Due to contract violations, lack of support, unpaid wages, benefits to my players, assistant coaches and myself, I resign as Super Eagles chief coach," he wrote on Twitter.

"I feel fortunate, blessed and eternally grateful for having had the honour to play, captain and coach this great nation of ours, Nigeria."

The NFF has yet to issue an official response to Oliseh's resignation.

Oliseh has endured a turbulent spell as coach in which his decision to strip Vincent Enyeama of the captaincy prompted the goalkeeper to leave the national team camp in October.

A first-round exit from the African Nations Championship prompted huge criticism of Oliseh and a video posted online in which he hit back at critics and the NFF caused a storm this month.