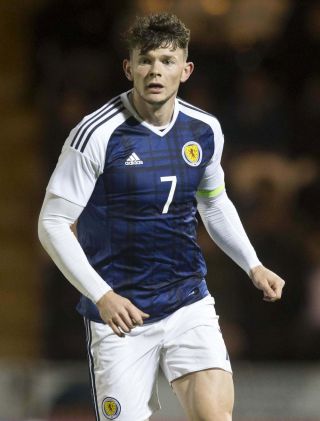 Oliver Burke says Celtic have helped him kick-start his career and now he wants to step up a gear and re-establish himself with Scotland.

It is two years since the on-loan West Brom forward won the last of his five senior caps.

But he is back in the national team set-up after being named in Alex McLeish’s squad for this month’s clashes with Kazakhstan and San Marino.

The 21-year-old found himself out of favour at the Hawthorns but has now earned his recall after returning to action with the Hoops following his January loan switch.

And now that he is back up and running with the Parkhead side, Burke hopes to make up for lost time by motoring straight into McLeish’s line-up for the Scots’ opening Euro 2020 qualifiers at the Astana Arena a week on Thursday.

“It’s an amazing feeling,” he said. “I was delighted to get the call-up and I’m really looking forward to it. It’s been a long time coming.

“I’m really happy with the way things have gone here at Celtic. It’s put me in a great position and that’s got me the call-up.

“This move is something I really needed to kick-start my career. I’d been starved of football but I’m so happy to be back playing now.

“Now I have to make the most of the opportunity with Scotland and I’ll do my very best.”

Burke was handed his first Scotland cap by Gordon Strachan in a friendly with Denmark in 2016 after bursting onto the scene as a winger at Nottingham Forest.

However, he struggled to live up to that billing as moves to Bundesliga outfit RB Leipzig and West Brom proved frustrating.

Burke is back in his groove at Parkhead having found a better fit as a central striker – although he has not ruled out a move back to the flanks if that is in McLeish’s thinking.

“It’s good to have that flexibility in positions, especially if something happens in a game and you are able to swap about,” he said.

“But I’ve been really enjoying my role here as a striker and it’s really worked out. I’m enjoying myself.”

Burke has had to cope with the added strain of having transfer fees totalling £28million attached to his name.

It is hard to say West Brom have had value for the £15million they spent on making him Scotland’s most expensive player given he has contributed just one goal in 21 appearances.

And Burke admits he is not sure what the Baggies’ plans will be for him now that they have sacked boss Darren Moore.

“It’s not something I know too much about,” he confessed as he spoke ahead of Sunday’s trip to Dundee. “I’m a West Brom player but I’m here at Celtic and that’s my focus right now.

“To be honest, it’s all a bit out of my hands. We’ll just have to see.

“This is football and I’ve been through it enough times now to understand what’s going on and hopefully my next step is the right step. But I’m here at Celtic and enjoying myself.

“A lot goes through your head when you go for a big fee as there are a lot of expectations.

“It was a little bit disappointing as all I wanted to do was play football. That’s what I’ve loved since I was a young boy.

“There is a little bit of weight on your shoulders (when you move for big money). People expect you to be the complete player. But that’s just how it goes and you have to deal with it.

“To be honest I never really thought about the price tags too much. I just focused on what I had to do to become a better player.”