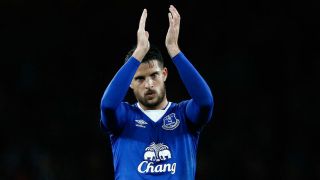 The 30-year-old Belgian joined the Toffees from Olympiacos in 2012 and played 186 games for the club.

Yet, he has only made five appearances for Everton in the Premier League this season – three of them as a substitute.

Mirallas has not once been in the squad since Sam Allardyce was appointed manager.

Mirallas' first stint at Olympiacos saw him score 34 goals in 71 appearances, as the club won back-to-back Greek Superleague titles in his two seasons there.