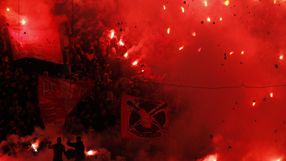 Ernesto Valverde's team made a flying start and were 3-0 up inside 20 minutes thanks to goals from former AEK striker Raffik Djebbour, Olof Mellberg and David Fuster.

"We are worthy champions," Valverde told a news conference.

"I don't think you saw a different Olympiakos than in previous home matches. We play attacking football and the only difference today was that we converted more of our chances."

Valverde's men, who have a 100 percent home league record this season and need just two more wins to set a club record by going unbeaten through a whole campaign on home soil, have 67 points from 27 matches.

They hold a 10-point lead over Panathinaikos who defeated Kerkyra 2-1, while AEK, who clinched a place in the Greek Cup Final with victory over PAOK Salonika in midweek, remain third place 43 points.

The club took the unusual step of publishing a statement of apology to their fans on the official website.

"AEK feels the need to apologise to all of its fans for today's black night which unfortunately will remain as one of the worst moments in the club's history," the statement said.

"The responsibilities lie with everyone and the defeat must not distract us from our target of winning a trophy after nine years and the battle for the second Champions League place via the play-offs."

Valverde, who won the domestic double in his first spell at the club in 2008/09, has taken credit for the title win after inheriting a disjointed squad.

"It was clear when I arrived that this was not a team which had been organised by me," he said.

"I knew some players from my first spell but this success is down to the players themselves. My first team was probably tougher but this group are a lot more attacking, even if I prefer to have both elements in my teams."

Panserraikos were relegated following a 3-1 defeat by Aris Salonika while second-bottom Larissa were denied victory over Ergotelis when a stoppage-time strike by Maris Verpakovskis levelled the match at 3-3.