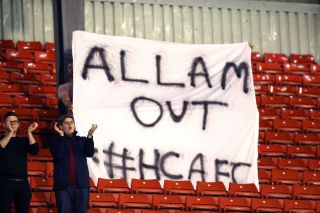 Hull’s last-day defeat at Cardiff confirmed their relegation to the third tier for the first time in 15 years.

The Tigers were in the Premier League during the 2016/17 season, so why did it all go wrong?

Here, the PA news agency looks at some of the reasons behind the club’s demise.

Steve Bruce guided Hull to the Premier League in 2016 for the second time. He had also achieved the feat in 2013 and it was the club’s third promotion to the top flight in eight years. But Bruce resigned before a ball had been kicked in the 2016/17 season, with a breakdown in his relationship with vice-chairman Ehab Allam a major factor. The club’s plans were in disarray and since Bruce left the Tigers have been on an irreversible slide.

During that last season in the Premier League the Tigers were rocked by the loss of club record signing Ryan Mason, who never played again after fracturing his skull, while Robert Snodgrass was sold to West Ham for £10.2million. Bruce’s successors Mike Phelan and Marco Silva failed to keep them in the top flight and following relegation back to the Championship subsequent bosses Leonid Slutsky and Nigel Adkins were unable to revive the club’s fortunes.

Ten years before Hull won promotion to the Premier League for the first time, the club had gone close to going out of business and off-field troubles emerged to dominate again at the KCOM Stadium under owner Assem Allam soon after Bruce had steered them back to the top flight in 2013. Allam’s bid to change the club’s name to Hull Tigers was fiercely opposed by fans. A campaign group called City Till We Die was formed and Allam told the media:
“They can die as soon as they want.” The Egyptian-born businessman put the club up for sale soon after and the fans wanted him out.

Allem had taken control at Hull in 2010 and under him the club have twice been promoted to the Premier League and reached the 2014 FA Cup final. But the damage was irreparable. He further alienated supporters by scrapping season-ticket concessions and rebranding the club’s badge. Fans began to stay away from matches in increasing numbers and many of those who still attended vehemently protested. Hull’s home game against Sheffield United in 2018 was temporarily halted when supporters threw yellow sponge balls on to the pitch, but the Allem family are still at the helm.

Three years ago Hull beat reigning Premier League champions Leicester on the opening day of the 2016/17 season. They beat Liverpool at the KCOM and also Manchester United, in the EFL Cup. But those memories are fading fast. Andy Robertson, Ahmed Elmohamady, Tom Huddlestone and Eldin Jakupovic were all sold following relegation, while current manager Grant McCann’s bid to turn things round in the Championship were undermined by the departures in January of Jarrod Bowen and Kamil Grosicki. Their sales made financial sense, but the Tigers’ star players have never been adequately replaced.