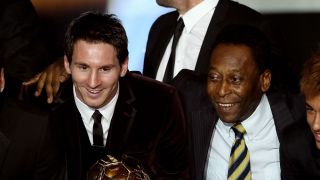 Pele has belittled Lionel Messi as a player who only has "one leg" and "one skill".

The Brazil great is regarded by many observers to the greatest footballer of all time but has seen this status come under scrutiny on account of Messi's phenomenal exploits for Barcelona over the past decade.

Indeed, three-time World Cup winner Pele does not even think Messi is the best Argentinian player in history – telling Folha de Sao Paulo that Diego Maradona was "much better".

"As far as I'm concerned, Maradona was one of the best players ever. If you ask me, 'Was he better than Messi?' Yes, he was. Much better.

The 31-year-old has scored 41 goals and supplied 20 assists in 45 matches across all competitions in 2018, giving him more goal involvements than any other player in Europe's top five leagues.

Nevertheless, this was only good enough to give him a fifth-place finish in this week's Ballon d'Or vote, as Real Madrid's Luka Modric walked off with the main prize – the first time since 2006 Messi has not attained a podium place at the prestigious gala.