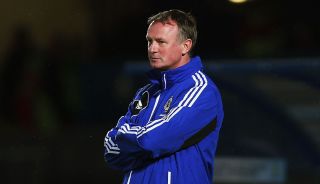 O'Neill's men slipped to a disappointing loss in their penultimate FIFA World Cup qualifier in Baku, with striker Rufat Dadashov and Mahir Shukurov finding the net as Azerbaijan secured their first win in Group F.

Defender Jonny Evans was sent off in the 94th minute to compound a miserable evening for a Northern Ireland side that slipped to a third consecutive defeat after suffering losses to Portugal and Luxembourg.

But O'Neill feels his players were unfortunate not to have taken anything from the game.

"We dominated the game particularly in the first half. We had numerous chances but didn't take them," he told Sky Sports.

"We then had a bad five-10 minute spell and they scored at that point. It was a poor goal to lose.

"I felt the second half was more even as a contest, unlike the first half when we were totally dominant.

"But again like many other games it's the same story in many ways. We have dominated at lot of these types of games and come away with nothing.

"We feel a bit aggrieved but at the end of the day we are left scratching our heads how from such a strong position in the game we ended up losing."