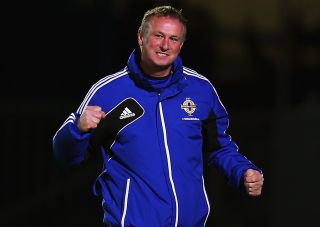 The 44-year-old took the job in December 2011 and has guided the country to one win in 14 matches during his tenure.

O'Neill picked up his only victory to date when Northern Ireland beat Russia during their FIFA World Cup qualifying campaign in August, but they finished second bottom of their pool with just seven points from 10 games.

However, the Northern Irish FA believe O'Neill is the right man for the job, and have extended his deal to include the UEFA Euro 2016 qualifying campaign.

And O'Neill is thrilled to have been given the opportunity to improve on their showing in the World Cup qualifiers.

"When I was appointed Northern Ireland manager I was honoured to have been chosen to manage my country; and I am extremely happy to have agreed a new two year deal with the Irish Football Association," he said.

"I have said all along that I would like to continue in the role - I think there has been a major transition in the team; it's a very young squad, but a squad which has developed during the last campaign, with several young players of quality emerging; and I am now looking forward to taking the team into the European Championship qualifiers."