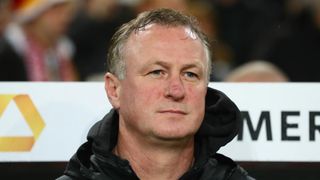 Michael O'Neill has stressed Tuesday's 2-0 defeat at the hands of Germany is by no means a disaster for Northern Ireland.

Goals from Julian Draxler and Sami Khedira saw Germany go 2-0 up before the break and Northern Ireland failed to bounce back in the remainder of the game.

Nevertheless, O'Neill believes Northern Ireland will not be the only team to lose away to the reigning world champions.

"I could not have asked any more of the players," O'Neill told reporters after his side's World Cup qualification defeat.

"In the second half we defended well. We ran out of legs a little bit to threaten them but at the end of the day we said if we could take anything here it would be a huge bonus.

"We have been beaten 2-0 but I think that whatever happens I do not see any of the other teams coming here and winning, so it is far from a disaster.

"Now we have to look forward to the next game against Azerbaijan."