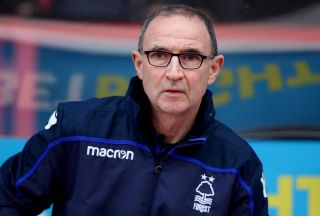 Joe Lolley grabbed a brace either side of Alexander Milosevic’s volley to give the hosts a resounding win.

Forest’s margin of victory would have been greater but for a fine performance from Darren Randolph in the Boro goal, with man-of-the-match Joao Carvalho in inspired form.

“What we as a side have to do now is try and win away from home,” said O’Neill, whose side came into the game on the back of four straight defeats which had ended their own play-off aspirations.

“It’s a question of saying this is a performance where we were terrific, the best performance of the season, and the players have to go and earn that right to do a little trick on the ball in the 75th minute when you’re 2-0 up.

“That was us at our best, but what we want to be is at times when we’re not at our best to be able to cut it and that’s something that’s been missing at this club for a long, long time.”

The 22-year-old Carvalho has struggled to hold down a starting spot recently despite arriving for a £13million fee from Benfica in the summer, but was instrumental throughout against a Middlesbrough defence depleted by injuries.

“The whole experience of this year is to get him ready for next season,” O’Neill added when asked about the Portuguese forward.

“The players work that wee bit harder for him because they know that he’s got this particular talent – Ben Osborn covered an amazing amount of ground today.”

The hosts dominated from the off, with Osborn, Matty Cash and Karim Ansarifard all denied before Forest were awarded a penalty six minutes before the break when Ryan Shotton tripped Ansarifard as the Iranian was about to pull the trigger.

Lolley stepped up and comfortably blasted his effort from 12 yards into the roof of the net.

Randolph showed fantastic reflexes to parry away Ansarifard’s effort from six yards after the break when Carvalho’s clever cross without the outside of his boot found the forward unmarked.

The home side got their second after 65 minutes as Carvalho’s quick free-kick caught out Shotton and Cash’s looping cross to the back post was volleyed in by Milosevic.

Carvalho curled a magnificent looping effort against the post from 20 yards as the home side threatened to run riot, before the Portuguese’s skill down the left led to him squaring to Lolley for the third.

A first defeat in four leaves Middlesbrough outside of the top six and Pulis admitted his side, who failed to test Costel Pantilimon in the Forest goal, had been disappointing.

“It was always going to be difficult; we’ve only got two real defenders on the pitch,” he said.

“We’re trying to put square pegs in round holes and it really caught us out today.

“I’m disappointed. We played with forwards on the pitch today, more forward-thinking players than I’ve ever played, and you want them to do a lot more going forward.

“We’ve still got a chance. We’ve got to dust ourselves down and we need all the players to be together and try and get a result Saturday.”