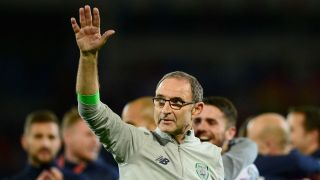 Martin O'Neill has signed a two-year contract extension to remain as Republic of Ireland manager until 2020.

O'Neill guided Ireland to the play-off stage of qualifying for the 2018 World Cup but saw his side beaten by Denmark as they were thrashed 5-1 in the second leg in Dublin having claimed a goalless draw in the first leg.

The former Leicester City, Celtic and Aston Villa boss had been linked with the managerial post at Stoke City, but reportedly turned that down before the Potters opted to appoint Paul Lambert.

And he will now lead Ireland in the newly formed Nations League and qualifying for Euro 2020.

Ireland reached the last 16 in Euro 2016 but were knocked out by hosts and eventual finalists France.

BREAKING: Martin O’Neill has signed a contract extension to remain on as Ireland manager until 2020! January 23, 2018