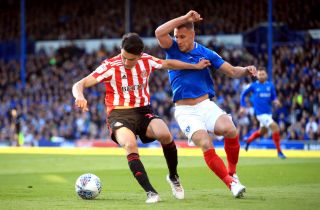 Sunderland defender Luke O’Nien joked his little cousin hits harder after appearing to be kicked and punched by a spectator at Fratton Park.

O’Nien looked to be assaulted by fan in the home end having been nudged over the advertising boards and into the crowd during Thursday’s goalless Sky Bet League One play-off semi-final second leg against Portsmouth.

The 24-year-old was asked by police if he wished to press charges, but the right-back played down the incident.

“It was just a bit of handbags. It’s nothing to think about too much,” said O’Nien.

“I’ve seen my little cousin hit harder than that, so not a problem with that.”

Speaking to Sky Sports, he added: “I went over the boarding, they had a few digs at me but..

“(I was) asked if I wanted to press charged but that’s just football, it’s part of it.

“(There was) a little bit (of contact), it was what it was, he didn’t hurt me, I think he got arrested in the end.”

The Black Cats progressed 1-0 on aggregate thanks to Chris Maguire’s first-leg goal and will face Charlton or Doncaster in the final on May 26.

Manager Jack Ross did not want to let “one idiot” ruin the occasion or the feeling of reaching Wembley.

“I asked the fourth official and he said I think a supporter had swung an arm at him, which isn’t great,” said Ross.

“I wouldn’t make too big a deal of it, not because we won the tie but simply because I enjoy coming here. I think it’s a proper football ground, really good fan base.

“One idiot shouldn’t spoil it or tarnish that fan group.

“Knowing Luke as a lad, I would be very, very confident that he hasn’t instigated anything because he’s far from that type of character.

“You can’t condone it but there are 18,000-plus people in this stadium tonight and the vast majority come here to support both teams and back them properly.”